Wife started with the .22 of course... right off the bat she was grouping 2" at 7 yards, which I think is just awesome for a first time handgun shooter. She moved up to the .380 and the .38 special rounds, but found herself going back to the .22 after that pretty quickly. She didn't touch on the .357 or the .45 just yet.. baby steps. I think for most people, the more exposure you get the easier it is to shoot the bigger calibers. I'd like to see her eventually settle in on a j frame sized .38. We'll see what happens there.

I did have the chance chatting with one of the guys at the range to shoot his new Kel-tec PF9. That little bastard HURT to shoot! It's gotta be great as a carry gun... it was accurate and wow is it thin... but for a range plinker, no thanks.

Decided I really hate the Heinie straight 8 sights on my Taurus... seriously just can't stand em. I hope I can find something that'll put the bullet where I think I'm trying to drive it.

Last but not least today, my crossbreed supertuck showed up for my Taurus PT145! Wow is it comfortable! I adjusted the cant perfectly, and it hides perfectly well on my frame... just excellence all around.

thats good to hear about the wife dude!

Good to hear you took the Mrs. out shooting...and not all of us walk away when it comes time to clean, I love to sit down and clean, specially my own weapon.

very nice! that's a big plus for me is that my wife loves shooting! she shot my brother in law's AR-15 last saturday and really liked it.

Glad to here she has taken steps toward providing for her on defense/protection.

My wife has started going with me as well. She's been 3 times now and like your wife started out with the .22 and still loves it. She has shot a couple of my 9mm and both .45 Kimbers. She really likes the .45's but after only 2-3 mags full it starts hurting her hand. I just got a Taurus .357 and she really likes it. Using .38's she can group better than any of the other guns. 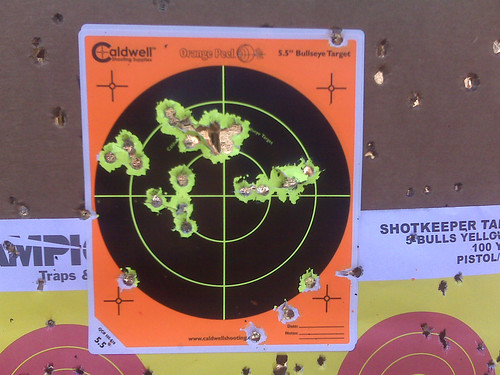 Cari A. said:
Good to hear you took the Mrs. out shooting...and not all of us walk away when it comes time to clean, I love to sit down and clean, specially my own weapon.
Click to expand...

i wish mine would help with the cleaning.leasantry:

I took my wife out last week too. She figured if there were going to be guns in the house then she wants to know how to use one. She shot 2 mags through my M&P9c. The first mag she only hit the paper twice. After I showed her some different stances and a couple different grips and told her to try whichever felt the most comfortable to her she put 11 of 12 on the paper with 8 within the 7 ring and 1 in the red. I was proud of her for it being the first time she had ever even touched a gun in her life. I couldn't get her to touch my .40 though. She is wanting to go out with me some more too. Glad to see some other guys getting their wives out too.

gunther37 said:
i wish mine would help with the cleaning.leasantry:
Click to expand...

So far my wife wants to help with the cleaning, so she sits and I'll ask her to hand me stuff, but truthfully, she's not that mechanical and I would rather not having her taking apart the guns.