The Russians did it, or did they?

Every time you turn on the news now a day’s, all your hearing is the Russians hacked into our E-mail systems to influence the election to favor Trump.
.
Now let’s go back a few months and remember about what was in the news back then. The questions of Hillary’s unsecured unauthorized E-mail server that the FBI director said was possibly hacked by five foreign intelligence agencies and obtained access to all of her info that was on her server.
.
So basically all of the WikiLeaks E-mails that revealed Hillary’s underhanded E-mails were Hillary’s own fault for having this E-mail system that she had and was used against her.
.
And think about this, why wasn’t there all of this concern about the hacking when the Whitehouse, DOJ, IRS and Defense Dept. were hacked last year. It looks like Obama and the media are more concerned about it now where it comes to this election.
.
You hear that 17 of our intelligence agencies have said, that in their estimate it was the Russians that hacked into everything, but think about this, it’s also been noted by the FBI that it’s was also possible for whoever did the hacking, installed a data line to point to the Russians, when it wasn’t them at all.
.
The bottom line is, we all want to keep our computer systems safe against the possibility of being hacked by anyone, but like I said, when Hillary disregarded normal safety procedures of her E-mails for her own conveyance to bypass FOIA requests, she has no one else to blame but herself for all of these E-mails that came out. 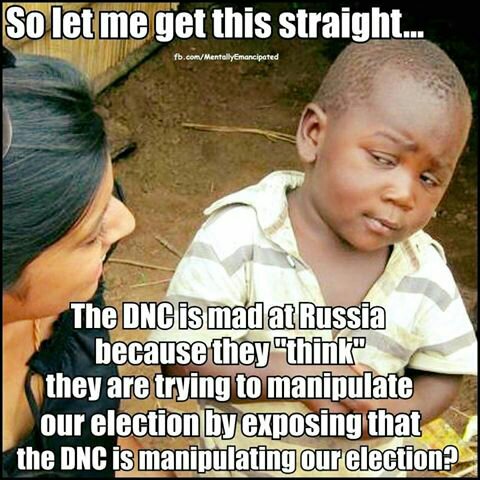 Only a complete fool or a total idiot would be gullible enough not to believe that Putin didn't try to manipulate Our election.

What's funny is the op tries to make people believe the info posted on Wikileaks came from Hillary's private server, which isn't true, but instead came from her election campaign staff and the DNC.

What's even funnier is the fact that some people where gullible enough to believe what was posted on Wikileaks without questioning it's credibility.

All indications of the hack point to Putin and the Russian government and some people are full enough to believe propaganda from Our #1 enemy.

No, Our #1 enemy isn't ISIS or some nut with a homemade bomb, it's Putin and Russia.

I realize that the basement dwellers' new King is buttbuddies and business partners with Putin and so is his Sec. of State, but currently Russia is the only country that poses any real threat to the USA.

Stengun said:
What's even funnier is the fact that some people where gullible enough to believe what was posted on Wikileaks without questioning it's credibility.
Click to expand...

:lol: The self-proclaimed government e-mail expert doesn't even know what DKIM is. The Podesta e-mails posted by WikiLeaks have been authenticated and confirmed that they have not been altered in any way. You are posting BS as usual.

No concern from the Dems about what was said in the hacks only about who did it.

Concerning the idea that the Russians did all of this hacking stuff, the Director of National Intelligence came out today and stated that his department didn’t see eye to eye with the comments that were disclosed by the CIA saying that it was a fact that Russia was responsible for the E-mail hacking that went to WikiLeaks, agreeing with the FBI on this subject.
.
Another question concerning various hacking that have been done, just last year China hacked into the governments data records and took over 50 million personal files of various government employees, where was all the outrage from Obama or the democrats when this happened?

1. Did the Russians have a motive to degrade our confidence in the integrity of the electoral process?
2. Did they have the ability to hack the DNC?
3. Does every US security agency acknowledge evidence of such hacking?

4. Would the Russians prefer Trump?

All of the above are YES.

We don't know if they set out to get Trump elected. There's no evidence that they hacked the actual vote results. But there is plenty of basis to conduct a bipartisan investigation to learn more. I hope everyone can put party and hatred aside enough to just do an investigation for crying out loud.


Sent from my iPhone using Tapatalk

This BS goes back a few years when all we heard was "The Russians are coming! The Russians are coming!" I have news for some people....they ain't here yet, however, if the election is overturned and Hillary put in office, it shouldn't be long before they will actually be here. Hillary and the elitists supporting her would actually like to see a war with Russia. After all, that is how they make their money at the expense of others. Putin is well aware of that and he said she would start one. Putin seems to be against war because he knows the results would not be beneficial to either side. Putin is trying to rebuild Russia to a power to be reckoned with while the US has taken the opposite road. We have just spent the last eight years seeing our country being slowly destroyed by incompetent leadership. Although Trump hasn't taken office yet, there have been signs of improvement over Obama's actions and they may be indicative of how the country may benefit from a Trump administration.

In answer to your questions, yes, the Russians could have had a motive in attempting to cast doubt on our electoral process. I think the DNC, et al, have cast serious doubts about the system moreso than the Russians. The Democratic Party is of more danger to us than most foreign powers and a continued position of power will completely destroy us. There is a distinct possibility of a Constitutional crisis looming all at the hands of a criminal elite who refuse to go down without a fight.

Granted, many people, organizations, and/or countries have the ability to hack all of our systems just as we have done to them. Before you accuse foreigners of doing the hacking, it might be wise to look into our own intelligence agencies spying on each other. It has become impossible to know who to believe anymore. And, would the Russians prefer Trump over Hillary? I definitely think they would. It is time for us to eliminate some of the political hacks in Washington and enable people who understand business get involved in the governing process. There should no longer be professional politicians running the store.