Signs of the End of the World As We Know It

The world is getting what it asks for and it's just the beginning.

One of the major prophesies pertaining to this last generation... Matthew 24:12..."Because lawlessness will multiply, the love of many will grow cold". We are already 73 years into this LAST GENERATION (1948-2028), we’re living in the LAST HOURS of human history as we know it. The American citizenry has become so corrupt, and considering the path that it is currently on, the violence at present is simply "CHILDS PLAY". And considering that the America people now have a government packed full of pedophiles, homosexual, lesbian, transgender & bi-sexual perverts, Muslims, Marxists, Socialists, Communists and Baby Killers representing them, America deserves every ounce of what is happening to it.


Homicide Rates Are Soaring As Hearts Grow Ice Cold All Across America​
https://www.prophecynewswatch.com/article.cfm?recent_news_id=4675​

2 Behold, I will make Jerusalem a cup of trembling unto all the people round about, when they shall be in the siege both against Judah and against Jerusalem.

3 And in that day will I make Jerusalem a burdensome stone for all people: all that burden themselves with it shall be cut in pieces, though all the people of the earth be gathered together against it.​

SOON--GOD WILL MAKE THE WHOLE WORLD TREMBLE OVER JERUSALEM, JUST LIKE HE SAID 2,600 YEARS AGO!
​
​
Rockets fired from Gaza into Israel as fighting enters second day​
https://www.timesofisrael.com/iron-...ocket-over-sderot-as-fighting-enters-2nd-day/​

How close is the world getting to the end? Here are some key indicators. The prophet Ezekiel warns that a conglomeration of Russia, Turkey, Iran and others will invade Israel in the last days. Those very nations are now just north of Israel in neighboring Syria, fighting insurrectionists, and have established a foothold in that region of the world. Something will trigger them to enter Israel “like a cloud,” and God Himself, not Israel, will destroy 5/6ths of the invading forces. It won't be much longer, they're on the doorstep now. Read about it in Ezekiel 38, 39.

Just before this happens, the city of Damascus will be destroyed . Isaiah 17 foretells that it will happen overnight – that quickly, which suggests a nuclear device will be employed. How much longer until Damascus gets leveled? Not long, because Damascus is already in the crosshairs on a daily, if not weekly, basis. Keep an eye on that situation. It will not be much longer until literally the whole situation and the city will explode.

So thankful it'll all be over very soon. Keep looking up.


We ARE The Last Generation - how much time is left?
WLink Removed​

Very soon after the Rapture...

Link Removed​
The Rapture will happen within the next 6 months. Soon, very soon after the Rapture, America (mystery Babylon) will be destroyed. America is not mentioned by name in Scripture, but, 100% fits the description of "Mystery Babylon". Eternity is too long to be wrong. The big question is are you ready?


As Americans Party, Our Enemies Are Preparing For Military Confrontation (prophecynewswatch.com)​

Thank God it'll ALL be over soon.

Just have faith in him!

Harry_Green said:
Just have faith in him!

The Israeli Defense Forces (IDF) in the Pre-Tribulation Prophecies (prophecydepotministries.net)​

Markell: Anticipating The Antichrist | Harbingers Daily​
Thank God we'll be out of here within a few months and then the world will get everything it wants, and deserves every ounce of it... " For then there will be great suffering, which has not been from the beginning of the world, and nothing this terrible will ever happen again" (Matthew 24:21) 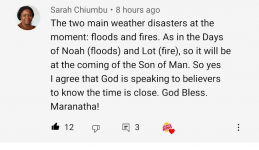