In the throes of an economic crisis and two wars, does the nation want more headlines about a "Pec-tacular" “Buff Bam”?

President Obama appears shirtless in a bathing suit on the cover of May issue of The Washingtonian magazine. The magazine's excuse? The pec pic illustrates the #2 reason (out of 26) to love living in the nation’s capital: “Our New Neighbor is Hot.”

Long before that, in February 2007, then-Sen. Barack Obama complained that a different beach pic got the media's attention instead of his policy positions, which he blamed on the meme that he was a lightweight.

But this time, White House aides -- who in the past have been appalled at the media's fascination with Mr. Obama shirtless -- today seemed nonplussed, one of them remarking that the President was in great shape.

Garrett Graff, editor-at-large at The Washingtonian, told ABC News the idea for the cover came during a discussion among the magazine’s staff about how, with the arrival of the Obamas, came a “celebrity aspect that has brought energy to the city and the attention of the paparazzi.”

“The Obamas are the center of attention here and the whole world is looking to Washington now in a way we haven’t seen in years,” Graff said, calling it “a real golden age of Washington.”

Now the golden age of Washington could certainly be illustrated with a photo of the president fully-clothed, perhaps in a tuxedo at an Inaugural Ball with his wife, first lady Michelle Obama.

So is the beefcake cover just an effort to sell more magazines and gin up some interest in the masthead?

Graff demurred on that question but acknowledged it was a different type of cover than the magazine usually does. He said they were trying to “capture the energy and excitement” over the Obamas in Washington and “have a little fun.”

“It’s a unique time in Washington and this photo helps capture all of the reasons why,” Graff said. “It’s not a normal way to look at a president of the United States but this is not a normal president.”

Graff said the magazine used the photo to illustrate two things: first, the president himself is hot – “you have a buff president and the paparazzi like taking shirtless photos of him,” Graff said – and second, the Obamas’ presence in Washington is “really hot.”

Graff said the magazine did not check with the White House before publishing and has not heard anything in response, but noted that the magazine does not hit newsstands until Wednesday.

The Obama transition team was less than pleased when pictures taken by paparazzi photographers of the family at their secluded vacation home on Oahu appeared on internet sites like tmz.com.

Obama has been captured shirtless before – from previous Hawaii vacations – and television networks, including ABC News, showed those images on-air during the presidential campaign.

Media critics, who have attacked reporters for coverage of the president’s dog, Bo, and the first lady’s penchant for wearing sleeveless dresses, now have more fodder for the week.

I think I am going to be sick.:bad:

you know.. when I was in germany last year before the election.. one of my wife's friends and I were talking about who should be president... she chose obama.. I asked why? her answer was.. "he is handsome"... so is that what should qualify some one to be president of the greatest nation in the world? I have since heard similar remarks about it by americans as well.. give me a freakin break!!!
T

Do you remember when you spoke about the president, and there was an air of reverence about it. That hasn't happened since Ronald Reagan, and that is sad. But to have a semi-nude president wanna be on the cover of a magazine, is pure sensationalism and shouldn't be allowed!!

It worked for Putin. Why wouldn't it work for another Soviet style ideologue? 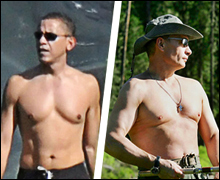 An Air-Brush will do wonders!:to_pick_ones_nose:

Red Hat said:
An Air-Brush will do wonders!:to_pick_ones_nose:
Click to expand...