Ringo said:
Yes, ONE photo-shopped picture that I found (reason) humorous to assert that Michelle Obama is a transsexual pervert. I disagree, believe it or not even the Democrats love for identity politics has it's limitations.
Click to expand...

But you have provided no evidence to back up you assertions that Michelle Obama is either trans or a pervert. It seems the only reason you are making those assertions is because you think it is humorous, for what ever reason.

G50AE said:
But you have provided no evidence to back up you assertions that Michelle Obama is either trans or a pervert. It seems the only reason you are making those assertions is because you think it is humorous, for what ever reason.
Click to expand...

Nothing humorous about being a sexual pervert be it homosexual, lesbian,
pedophile or trans, etc. Only the bearded picture of Michelle is humorous. If you can't understand that, so be it.
G

Well I am glad that you think so little of this nation that you feel the need to make unfounded accusations against the (former) first lady. In your case the term juvenile has nothing to do with age and everything to do with maturity.

When it comes to the likes of the Obamas I'm glad that you're glad. After reviewing many of your posts, all I can say in reference to your derogatory remarks of "juvenile has nothing to do with age and everything to do with maturity" is.... 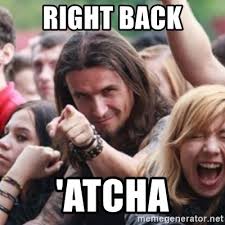 Getting back to the OP's original assertion that the Obama children are adopted, either legitimately or not, there is another reason to doubt everything about what the OP posted. I realize that 2008-2010 was a long time ago for some people's memory, but what was Barack Obama's main political focus? Take a minute to think about it before reading ahead.

Barack Obama spent two years working almost single minded on one political objective, passing Obama-care. Anything and everything else was secondary. If the Obamas were a childless couple who chose to adopt two children, they most certainly would have used this fact to help push through Obama-care. The argument would be along the lines of, "We need to pass Obama-care so that couples who want to have children but are unable to due to medical difficulties have access to fertility treatments covered by Obama-care." Any extra ammunition, no pun intended, to shoot Obama-care across the finish line, again no pun intended, would have been locked and loaded.
You must log in or register to reply here.
Share:
Facebook Twitter Reddit Pinterest Tumblr WhatsApp Email Share Link