Staff member
I woke up at 4:30AM and pretty much jumped right out of bed. I knew I was going hunting for the first time. A friend of mine has some hunting property not too far from Tampa so I took him up on the offer. I don't have a hunting rifle, yet, so he let me use his Link Removed in 7 mm-08. As I was loading some things in the truck I saw two shooting stars. Good sign right?

We got to the shoot house at about 7AM and as we were walking up we saw a doe on one of the trails, so far so good. After that was saw a group of turkeys walking up one of the trails and one of them was a gobbler. At first I wasn't going to shoot it since we had just got up there and I really wanted a deer and didn't want to scare them. But then decided against it and got him sighted in. I was waiting for him to turn sideways to get a shot as my friend told me to stop. We was some deer coming through another area but they wound up being 3 more does. A few more minutes I saw a buck right before he went behind some thick area. We waiting to see if he would come out on the trail but he never did. So then I went back for the turkey. By that time they got a little closer, about 50-75 yards and I had a good shot. My friend was telling me it would be hard to shoot one with the rifle but I shot him right through the neck. That felt pretty good. He had a 10 in beard. That was at 8AM. 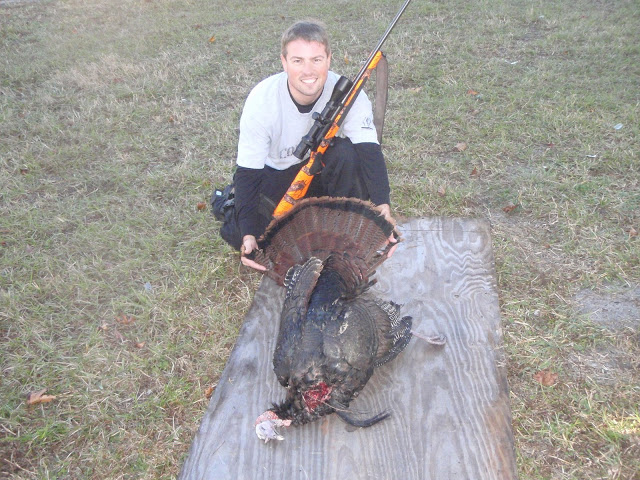 We thought about going to another stand but decided to stay put and wait for a buck. And maybe 15 minutes later we see a 4 point buck walk across the trail. I sight him in, pull the trigger, CLICK. No bang! I forgot to chamber another round and I didn't know how to work the bolt on the Blaser! By the time I gave him the rifle and got it back he was gone.

We settled down and waited again. Right at 9AM we saw a doe walk across the trail and right before she got across she stopped and looked behind her. My friend told me, "Watch, there's a buck following her." And then I saw another deer about to come across the trail. I sighted in and a 6 point buck walked out. He stopped and I took the shot. I could have sword I had a perfect shot on him but missed! But be ran back about 100 yards and stopped again! As he's running I'm handing the rifle to my friend telling him to CHAMBER A ROUND! CHAMBER A ROUND! I got the rifle back, sighted him in and took him down. He dropped right where he was standing at about 200 yards. At that point I'm ready to jump out of the shoot house and go check out my deer but my friend said to stay put and see if there were any other bucks with him. I'm looking around and them look back at my deer....wait...where's my deer! He jumped up but I didn't see him. So we went down to get him. We walked around the woods around where I thought I shot him at thinking he went across the trail but he wound up just going up the trail a bit and flipping down into a lower part of it. That was such a relief because I was getting discouraged about not being able to find him. We figure that he was following that doe and he heard the shot but didn't see us. So he ran back and stopping thinking where's the doe that I was chasing and where was that shot from. Luckily him thinking with the wrong head enabled me to get a second shot on him. 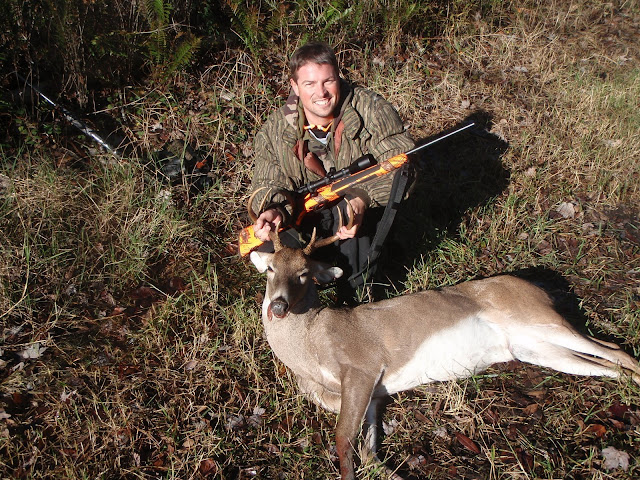 My friend called a buddy to come over and help us with the deer. He showed up with one of his friends who just happened to be a taxidermist. I decided to get the deer mounted since it was my first deer. So they took the turkey and the buck and took it to their house to clean him while my friend and I went to eat breakfast. By the time we get to his friend's house they have all the meat in the cooler and I'm in his living room checking out all his mounted deer to decide how I wanted him mounted. I went with him head up and looking to the left since that is how I shot him. They said I shot him a little high but I severed his spine. After talking about it we decided we'd run back home to let our dogs out and head back to hunt in the afternoon. I figured it couldn't get any better.

We get back to the property at 5PM and I go to the same shoot house alone and they head to some other ones. Not 15 minutes later does a buck walk across the trail about 100 yards away. I get him sighted and he's a 5 point and a little smaller than the other one. I took the shot and dropped him right where he was standing. I'm thinking my friend isn't going to believe this. I called him and I get, "You've got to be kidding me!" "Nope, I just shot a 5 point!" So I sat in the stand for a little while until they came and helped me with the deer. We got him back and cleaned him as well and I decided to go with a European mount just so I could have three things on the wall from my first time hunting. 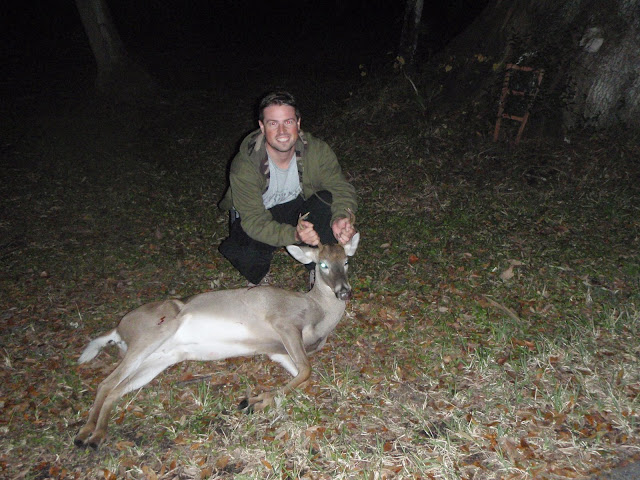 So from what I hear going out hunting for your first time, shooting a turkey, a 6 point, and a 5 point AND having a taxidermist come out, pick up the game, clean them, and mount them...isn't a normal day of hunting??? They just kept saying don't get spoiled! I won't but I'm definitely hooked. I think I'll be there quite a bit before the season is over.

I went 3 years before getting my first buck. Congrats on a great, extremely lucky day!
Today, there were deer already in the clearing when I arrived at my stand. Getting snorted and stomped at, before sun up will make sure one is awake. I saw 3 pairs of does cross my field of fire, then about 930, I decided to go check a section my BIL had cleared during the summer, and had 2 more does walk within 20 feet of me on the fire break.

Staff member
Yea, from what I am hearing I was extremely lucky today. I probably won't see another deer for years!
D

Great job lukem, two bucks and a turkey in one day is going to be hard to beat but what the heck take them while you can. The 22 of Dec late doe season opens back up in my area and will be off work so will try and do some hunting then.

enjoy your venison and turkey:victory:

Staff member
What a day for my family. My dad also shot the first deer of his life yesterday. He got an 8 point that will be going into Boone and Crockett, not a state records, something about the antlers.
W

lukem said:
What a day for my family. My dad also shot the first deer of his life yesterday. He got an 8 point that will be going into Boone and Crockett, not a state records, something about the antlers.
Click to expand...

For wildlife management record-keeping. Check the FWC site, they may want to know about your two also.

wolfhunter said:
For wildlife management record-keeping. Check the FWC site, they may want to know about your two also.
Click to expand...

I've read through their site a few times already and didn't see anything about that. He was in a different state, Louisiana and it was something about them being different than normal antlers, the width. I'm waiting to talk to him again.
W

Luke,
I was thinking of the Florida Buck Registry, but couldn't remember what info they tracked, just remembered mention of B&C. Link Removed
Last edited: Dec 14, 2008

wolfhunter said:
Luke,
I was thinking of the Florida Buck Registry. Link Removed
Click to expand...

Gotcha, I didn't see that. Looking at it now, thanks.

Nice! You can shoot turkeys with a rifle in FL?????

Congrats Luke! I went deer hunting this year for the first time also. Except my experience was the total opposite. I didn't see anything! lol Both are nice looking deer. Good to hear you had a good time and hopefully my next attempt will go as well as yours did!

PascalFleischman said:
Nice! You can shoot turkeys with a rifle in FL?????
Click to expand...

Yep. I scoured the FWL site before I went.

Dang...it's archery only, both sexes, herra in TN during the fall. Then it's shotgun/archery for toms only in the Spring.

Shooting ANY bird with a rifle in TN will get you thrown under the jail.

Staff member
Thanks. I've been looking at bows. I think I'd like to give that a shot too.

wow that is an amazing day. I went up north this year for hunting and did not see anything but tracks.. both deer and wolf. others with me saw some deer, one got a shot off but missed. hopefully I'll have a story to tell like your's someday.
You must log in or register to reply here.
Share:
Facebook Twitter Reddit Pinterest Tumblr WhatsApp Email Share Link