God uses prophecy to prove He is who He says He is, and to authenticate ALL of the warnings and the promises found in the Bible. If anyone wants to know how close we are to the END, all they have to do is look to ISRAEL, God's Prophetic Timepiece. We are already 73 years into this Last Generation (1948-2028) Jesus warned us about (Fig Tree Prophecy) and the signs are so strong now and the evidence is so clear that any person willing to accept the truth can see that yesterday's prophecies are without question today's headlines! We know that the Last Generation will be like it was in the days of Noah & Lot, because Jesus said it would. The description of Noah’s day was one marked with great violence and wickedness, the days of Lot marked with extreme widespread homosexual perversion. Conditions today mirror the days of Noah & Lot, however, on a far greater scale. The United States’ decision to recognize Jerusalem as the capital of Israel will plunge the region and the world into “a fire with no end in sight”. The US recognizing Jerusalem as Israel's capitol has set in motion the war of Psalm 83/Isaiah 17 and has caused the Ezekiel 38 alliance to begin to coalesce. It's great to see how God used Trump to fulfill Bible prophecy!

It’s like looking at a movie. The creative senses of the film’s director force our eyes to initially see a blurred vista—maybe a desert scene. At first, the scene just appears to be a barren waste.…

God's foreign policy pertaining to ISRAEL.."I Will Bless Those Who Bless You And Curse Those Who Curse You".​
And in that day will I make Jerusalem a burdensome stone for all people: all that burden themselves with it shall be cut in pieces, though all the people of the earth be gathered together against it. Zechariah 12:3

And it shall come to pass in that day, that I will seek to destroy all the nations that come against Jerusalem. Zechariah 12:9 God's foreign policy pertaining to ISRAEL.."I Will Bless Those Who Bless You And Curse Those Who Curse You". 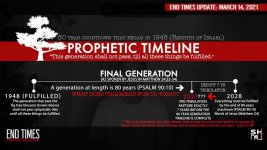 The Fig Tree (Israel) Reborn 1948
“Now learn a parable of the fig tree; when its branch is yet tender, and puts forth leaves, you know that summer is near: So likewise you, when you shall see all these things, know that it is near, even at the doors. Verily I say unto you, This generation shall not pass away, till all these things be fulfilled.” (Matthew 24:32-34)

“The days of our lives are 70 years;
And if by reason of strength they are 80 YEARS,
yet is their strength labour and sorrow.
(Psalms 90:10)

Jesus spoke a parable of the Fig Tree, which combined with Psalm 90 and the rebirth of Israel in AD 1948, now gives us the YEAR of Christ’s return – AD 2028.

The Gog and Magog War​